Since 1690, the United States has used paper currency. These bills provided a way to buy and sell items, as well as accumulate personal wealth. Just over a century later, in 1792, the first coins were produced, and moved the U.S. to a currency system beyond just paper.

While the purpose of these bills and coins has not changed, their looks have.

Over the past several hundred years, a slew of different presidents and other important figures have graced U.S. coins and bills over time. The names have changed based on popular culture and perception of historical figures.

So, which people are on U.S. currency right now? Use this handy guide to inform yourself and your children.

George Washington appears on the $1 bill. The U.S. mint produces more dollars featuring the first president of the United States than any other type of bill. Washington has appeared on the $1 bill since 1869.

Abraham Lincoln, who led the country through the Civil War and served as our 16th president, appears on the $5 bill. Though the note has been redesigned twice in the past two decades, Lincoln has remained on the front.

One of the few non-presidents on money, Alexander Hamilton graces the front of the $10 bill. Hamilton served as the nation’s first secretary of the treasury and is recognized as one of our founding fathers. He served as an assistant to Washington during the Revolutionary War.

Andrew Jackson appears on the $20 bill. The soldier-turned-politician served as the country’s seventh president. His portrait replaced Grover Cleveland’s on the bill in 1928 when a number of portraits were replaced.

Ulysses S. Grant, the nation’s 18th president, appears on the front of the $50 bill. He distinguished himself as a general in the Civil War. There are some who have suggested changing the portrait – for instance, lawmakers once floated Ronald Regan as a replacement – but no change has been made.

The other non-president besides Hamilton to appear on a U.S. bill is Benjamin Franklin, another founding father. He appears on the $100 bill. Franklin was a prolific writer and a statesman who helped secure French assistance in the Revolutionary War, a key part of winning independence from the British. 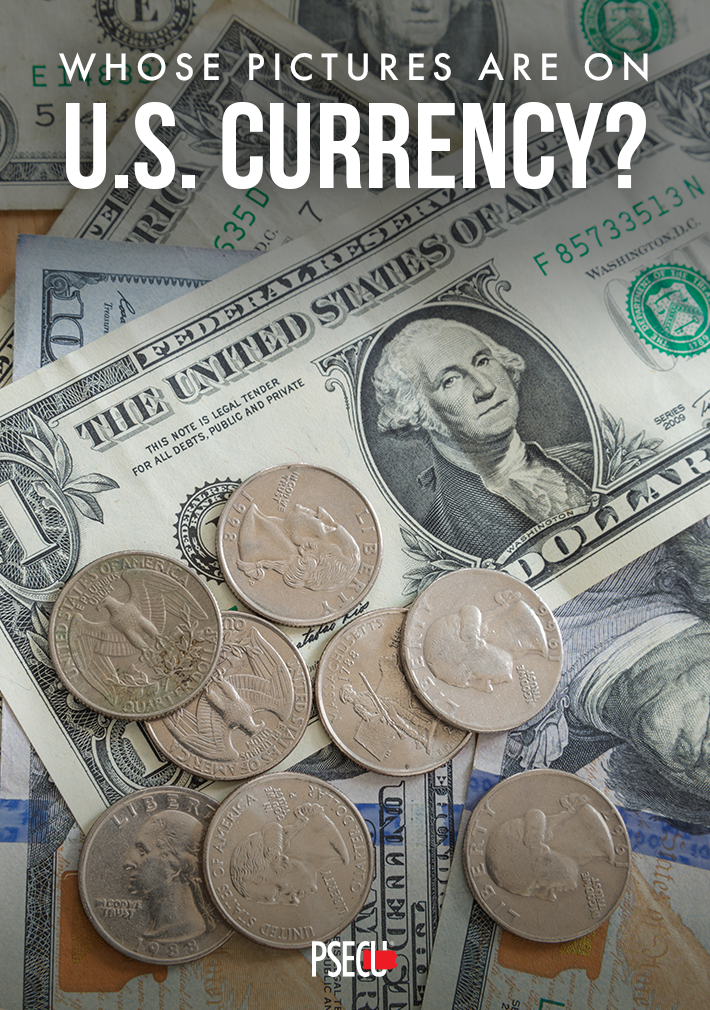 Who is on the Penny?

Lincoln pulls double duty as the face on the $5 bill and the penny. In 1909, Lincoln’s image was added to the penny as a tribute to the former president on his 100th birthday. There are more pennies in circulation than any other coin in the United States.

Who is on the Nickel?

Jefferson appears on the nickel in addition to the $2 bill. The coin is inscribed with the word “liberty,” based on Jefferson’s own handwriting culled from documents he wrote.

Who is on the Dime?

Franklin D. Roosevelt, the 32nd U.S. president and the only one to serve for more than two terms, appears on the dime. The U.S. Mint issued the first Roosevelt dime in 1946, the year after the president died.

Who is on the Quarter?

In addition to the $1 bill, Washington also appears on the quarter. Washington has graced the coin since 1932, which marked 200 years since his birth.

Who is on the Half Dollar?

John F. Kennedy appears on the half dollar. He began appearing on them in 1964, the year after he was assassinated. Prior to that, Benjamin Franklin appeared on the 50-cent coin.

Who is on the Dollar Coin (Silver Dollar)?

The U.S. Mint has issued a series of presidential coins, worth $1 apiece, depicting images of our nation’s deceased presidents. Each year, between 2007 and 2015, four coins were issued annually to honor each president in sequential order. During the year 2016, only three different coins were issued into circulation. Former presidents who are still alive have not been featured on coins.

The U.S. Mint also produced a series of coins featuring Native Americans beginning in 2009. Additionally, a limited number of special-edition coins with Dwight D. Eisenhower, Sacagawea, and Susan B. Anthony are also in circulation.

Are There Any Women on U.S. Currency?

Currently, no bills bear a woman’s picture. Martha Washington appeared on the dollar bill in the 1800s, and Pocahontas was briefly on the $20 bill, but it has been more than a century since any woman has graced a bill in the United States. Women have also appeared on coins, including Sacagawea and Susan B. Anthony.

In 2016, it was announced that several bills would be redesigned to feature women, including Harriet Tubman, and would be unveiled in 2020.

Teaching your child about currency provides a fun way to encourage the development of smart financial habits. You can also assist your child’s financial education by opening a joint account for children ages 13-21 or a custodial account for those under age 21 so they have a hands-on way to learn the importance of saving.